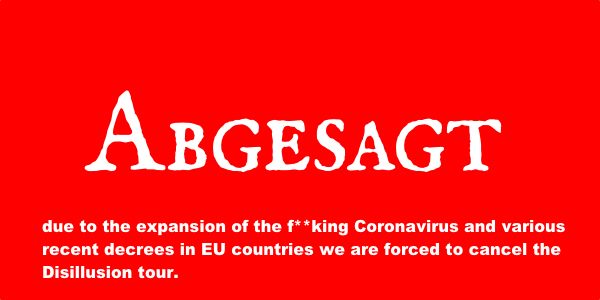 Friends, we are very much looking forward to presenting you our new album THE LIBERATION live, plus songs from BACK TO TIMES OF SPLENDOR and GLORIA. All of that is put into a long and intense live set. So, see you soon!

With their masterpiece Back to Times of Splendor (2004), Disillusion raised the bar for Melodic Death Metal to nearly untouchable highs; only to give the genre a completely new definition with their following album: Gloria (2006). Since then, Leipzig has no longer been a blank spot on the world map of extreme metal, despite a musical hiatus, with which the band has been torturing their fans for about ten years now. But the waiting is coming to an end. A journey to new horizons will begin with the single „Alea“, which will be released on the 7th of October, 2016.
Mastermind Andy Schmidt gathered the band again in 2015 to play several shows on European stages, dedicated to the vinyl-rerelease of “Back To Times Of Splendor”. In December, at their sold-out show on home turf in Leipzig, Disillusion surprised fans with the long awaited sensation: they had a brand new song in the set! A headbanging crowd paused for a moment in deep silence and listened intensely to “Alea”, the first milestone on the way to the new album. The fans sensed that this would be a departure to a musical world untapped before. But the fans also know Disillusion is not wandering between genres, but creating a fusion of familiar musical landscapes.
As massive as the differences between the epic and magnificent BTTOS and the hypermodern Gloria might be, Disillusion always managed to unite the two worlds seemingly effortlessly into one consistent cosmos, in which there is even space for their dark, technical early work „The Porter“. And now it`s “Alea”, which feels like it could have its home on both of the records. Schmidt understands how to take his fans by the hand and lead them from their particular favorite album into a new adventure. With nearly hypnotic serenity, Schmidt has conjured not less than an eleven minute hymn – the perfect soundtrack to the euphoric anticipation of his fans.
But where the journey will lead remains in darkness even for Schmidt himself: „ Alea was a first test, a tapping of the creative spring to see if it still bubbles. It’s been a successful attempt, but the record still has to be written – like it was on the albums before in total isolation from everyday life“. This works only with financial backing, hence there will be fundraising parallel to the release of the single.
One thing is sure: whether the borders of the genre will be shifted again or whether the band goes deeper into specific stylistics, this record will stand as typically Disillusion. In spite of the electric guitars and metal ingredients, their music has risen over all genres and works merely in categories of sensing and emotion. It is no wonder that the Disillusion records feel like cinematic concept albums as well as their concerts. Their music is a cinema-of-mind which rotates on high speed -fed by music -that doesn’t stick to a plan but reflects an emotional state of mind.